Magnetic motor coupling solves the problem of frequent oil leakage, fusible plug melting and bearing failure of the hydraulic coupling, which leads to the emergency shutdown of the calciner and seriously affects the soda production.

A soda plant has an annual production capacity of 300,000 tons of soda ash and 300,000 tons of ammonium chloride. Three self-returning steam rotary calciners are used in the production, including 2 light ash furnaces, 1 heavy ash furnace, and 2 light ash furnaces. The ash furnace can work at full capacity at the same time. The connection equipment between the main motor of the calciner and the reducer is a hydraulic coupler, but in actual operation, due to frequent equipment accidents of the hydraulic coupler, the production load cannot go up, and the half-load operation is repeated many times, which seriously affects the connection. The long-term and optimal operation of the alkali plant.

1 The working principle and use status of the hydraulic coupler 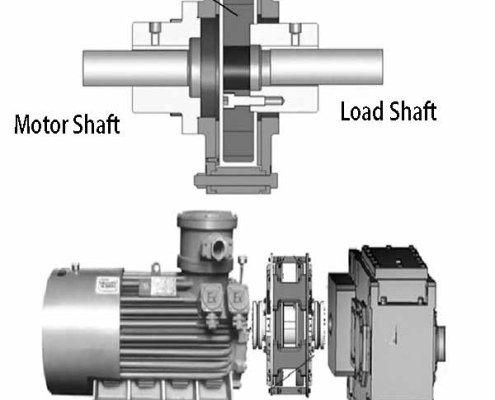 According to the requirements of the process, the air gap of the magnetic coupler can be adjusted to realize speed regulation and achieve the purpose of energy saving and environmental protection. During adjustment, the speed of the motor remains unchanged, and it still runs under the sine wave of 50 Hz, so it will not produce a series of problems caused by higher harmonics.

After using the magnetic motor coupling, the startup is smooth, which reduces the impact of the impact load during startup and operation, and prolongs the service life of the equipment. When the motor directly drives the load, the whole process from the motor startup to the load startup is completed at one time. After installing the magnetic coupler drive, the whole starting process becomes two stages: the first stage of the motor firstly rotates the conductor rotor with the magnetic coupler, and the second stage the conductor rotor of the magnetic coupler drives the permanent magnet rotor to start at a constant speed. Therefore, the whole starting process is stable, the impact is small, and it has the characteristics of soft start/soft stop, which can effectively reduce the starting current of the motor.

The motor can always work in the maximum efficiency area, and it will not fluctuate greatly due to changes in the load. The speed of the load can be adjusted according to the system operating conditions, which can save a lot of electric energy. According to the analysis of working conditions on site, the average annual power saving rate will be above 15%. 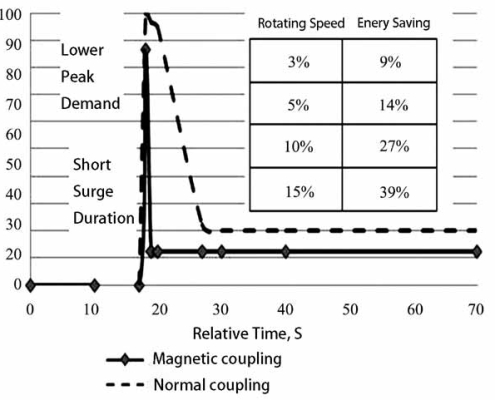 2) System vibration caused by shaft bending and thermal expansion can be greatly reduced. 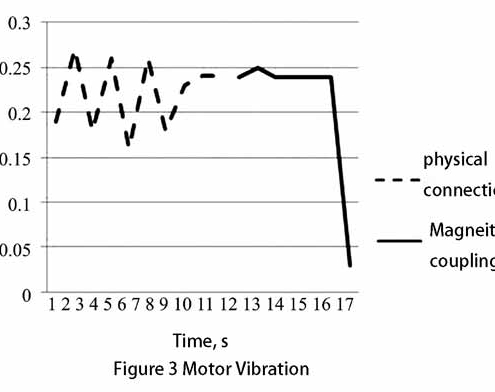 2.2.5 Significantly extend the time between failures and reduce the rate of failures.

The magnetic motor coupling basically does not fail. Because the torque is transmitted by the air gap, there are no wearing parts, which greatly reduces the vibration in the system, so that the bearings and shaft seals can be used in more Good operating point operation prolongs the service life of the motor and load, thereby reducing downtime and improving the utilization rate of dynamic equipment.

During the operation of the equipment, system overload or locked rotor often occurs, which causes the motor to be burned. After the magnetic motor coupling is installed, it has buffering and protection functions for the equipment with impact load and may be locked, reducing the damage of the motor due to overcurrent. Damage occurred.

2.2.8 Strong ability to adapt to the environment

It is suitable for various environments, and can be used in harsh environments such as high temperature, low temperature, high dust, high altitude, high humidity, flammable and explosive. 26 Soda Ash Industry

According to the original equipment parameters, it was transformed and replaced with a torque-limiting magnetic motor coupling.

2) Keep the center height of the original drive part (including motor and reducer) unchanged.

4 After switching to magnetic motor coupling

No matter in normal operation or in the process of starting and stopping the calciner after the transformation, the magnetic motor coupling shows absolute advantages, there is no abnormal phenomenon, the starting current drops by about 20%, the running sound is reduced, the motor and deceleration Machine vibration is reduced. The most important thing is that there is no oil leakage and zero failure phenomenon, basically maintenance-free, and the transformation achieves the expected goal.

Before the transformation, the calciner was shut down for maintenance on average every 2 months due to oil leakage of the hydraulic coupler, bearing failure, and the coupler’s temperature was too high and the fusible plug melted. During the half-load production period, it was about 24 hours. The annual maintenance cost of the motor and reducer due to the failure of the coupler is about 150,000 yuan. After the renovation, there was no system reduction phenomenon due to the failure of the coupler, and the calciner ran smoothly.