Magnetic coupling can improve the reliability of the belt conveyor, reduce the failure rate, reduce the damage rate of the machinery, and prolong the service life of the equipment. These advantages directly improve the production efficiency of the enterprise. Therefore, magnetic couplings and belt conveyors have been widely used in mining, docks, building materials, warehousing, material transportation, and other fields in the machinery industry.

1 Reliability of the belt conveyor by the magnetic coupling

1.1 The soft start of the magnetic coupling on the belt conveyor

The magnetic coupling achieves the purpose of soft start of the equipment by rapidly increasing the speed of the motor and shortening the existence time of the starting current. It can be seen from the working principle of the magnetic coupling that at the initial start-up, there is no relative motion between the input and output ends of the coupler, and no current, magnetic field and force are generated in the copper plate. For the motor, its load torque is 0, that is, no-load rotation. When the motor is close to the stable operating speed, with the increase of its load speed, the speed difference between the coupler copper plate and the magnetic disk quality inspection begins to gradually decrease, and the output torque of the coupler gradually increases. The load end gradually Obtains the maximum acceleration, and then gradually decreases until the output and load torque reach a balance, and the entire belt conveyor enters a stable operation state.

Using the magnetic coupling to replace the original hydraulic coupling, there is no mechanical connection between the motor and the reducer, which fundamentally blocks the transmission of vibration. The vibration on the side of the conveyor belt drive drum will not be transmitted to the motor side , and the vibration of the motor side will not be transmitted to the high-speed shaft of the reducer.

At the same time, the amplification of vibration during transmission is effectively blocked.

1.3 Influence of installation and maintenance of magnetic coupling

As a component without mechanical contact, the magnetic coupling has a certain axial gap between the main and driven discs, which allows greater misalignment than traditional components. This misalignment not only reduces installation requirements and installation costs, but also contributes to the stability of the system to a certain extent. When this misalignment is within a certain range of neck and angular directions, it will promote the transmission of the system. The magnetic coupling is mainly composed of copper disks, aluminum disks embedded with N and S-level permanent magnets with discrete and alternating gaps, input and output shafts and actuators for controlling air gaps. The structure is simple, the installation is convenient, and regular maintenance is not required. Save manpower and material resources.

2. The specific verification of the stability improvement effect of the magnetic coupling

When the magnetic coupling is used as the soft starter of the motor, this starting method has almost no damage to the motor, which greatly improves the service life of the motor and reduces its failure rate. During the entire startup process, the current is reduced, the energy consumption is less, and the power consumption is reduced by about 10%, and the operation is more stable. This zero-load start-up can increase the reliability of the rolling bearings of the consumable parts of the motor, further increasing the

Greatly improve the reliability of the motor. 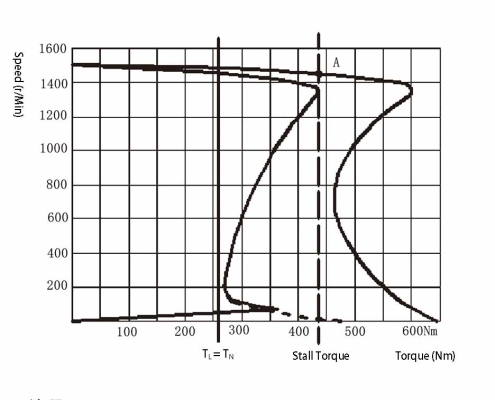 When a serious overload accident occurs, the motor current will be 4 to 7 times the rated current, and the temperature of the motor can rise to a very high level in a short time. Among them, the deformation of the bimetal inside the thermal relay takes a certain amount of time, and it is difficult to effectively protect the motor by relying on the thermal relay. The operating current of short-circuit protection is generally greater than the current value at this time. With both of these protection mechanisms out of action, there is a good chance of burning out the motor. In this case, the magnetic coupling is still protective. When the constant torque load is locked, the load torque is greater than the maximum torque of the magnetic coupling. At this time, the drag torque is less than the load torque and the speed decreases sharply until the speed becomes 0, as shown in Figure 1. Although the locked rotor causes the output speed of the magnetic coupling to be 0, the motor is only damag ed by the maximum torque once (point A in Figure 1). When the mechanical load is blocked, the motor is almost in a no-load working state. Even if the motor is in this working state for a long time, it will not cause damage, which greatly improves the service life of the motor, improves the use state, and reduces the failure rate.
3 Conclusion
After studying all aspects of the magnetic coupler, it can be found that after using the magnetic coupler, zero-load start-up is realized, the starting pressure of the motor is reduced, the failure rate is reduced, and the stability and reliability of its operation are guaranteed. Its overload protection capability is more prominent than thermal relays, which can better protect the motor when severe overload occurs. The magnetic coupler effectively isolates vibration and adopts a method without mechanical connection, which increases the service life of shaft and bearing components, and makes the working state more reliable and stable. The magnetic coupling is simple in structure, small in size, and requires low installation accuracy. Its misalignment feature is beneficial to the operation of the entire belt conveyor system to a certain extent. It can be maintenance-free and increase the maintainability of the belt conveyor. It is beneficial to enterprises and factories to save costs.