After designing the calculation of the actual process parameters after the start of construction, by increasing the motor coefficient to 1.3 for calculation, it is believed that the input power of the fan can meet the process requirements only when the input power exceeds 64kW. The calculation process is as follows:
N=[17.6×2000×(0.83/0.751)(temperature change correction coefficient)]×1.3(motor reserve coefficient)/[1000×0.8(fan efficiency rate) × 0.98 (mechanical efficiency)] = 64kW
However, the operation department disagreed with the review results of the design, and believed that the design adopts the flue gas temperature of 130℃ and the original design flue gas temperature of 180℃ to correct the temperature change, which is theoretically feasible. However, in the initial stage of fan startup, the gas in the flue is cold, especially in winter, the ambient temperature is even lower than 10°C, and the air density reaches 1.248kg/m3, which is 1.5 times the designed calculation of 0.83kg/m3. This difference is huge. Therefore, the environmental impact at start-up should be considered. At the same time, the motor reserve coefficient can be calculated according to 1.15 times of the industry general coefficient, that is,

According to the calculation, the fan starts when the ambient temperature is 10°C, and the input power needs to reach more than 85.8kW. By comprehensively considering the economic benefits, and according to the factory inventory and order cycle, it was decided to use a 90kW, 4-pole motor from the old inventory, and transform the coupling into a magnetic coupling scheme. Its parameters are shown in Table 3.
After the induced draft fan coupling was transformed into a magnetic coupling, the preheating system was successfully put into use. It has been running for more than a year now, and the system is running stably and reliably.

2. Product structure and the technical principle of magnetic coupling 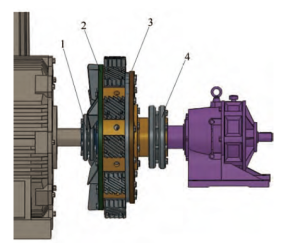 After more than a year of use and observation, it is found that the magnetic coupling, as a new type of transmission technology, has incomparable advantages of other technologies in terms of economic benefits and safety and stability of production. The main advantages are as follows What time is it.
1) Power saving: The flow rate and pipe pressure of fans and pumps can be adjusted by adjusting the load speed through the coupler to meet the basic requirements of the working conditions, thus changing the energy loss caused by the original single valve adjustment mode, which can save a lot of electric energy.
2) Consumption reduction: There are basically no maintenance requirements during the operation of the permanent magnet drive. The annual replacement rate of spare parts is very low, which is far lower than the failure rate of similar speed control products. The replacement cost of spare parts is also much less, which greatly reduces the maintenance and operation of the enterprise.
It can reduce the cost of running, reduce the loss of downtime caused by abnormal conditions, and create more and better benefits for the production of enterprises.
3) Solve related problems caused by pump vibration and fan surge, greatly reducing the failure rate of the system. Extending the life of the motor and load can significantly extend the life of bearings and seals, greatly reducing the consumption of spare parts for the system and reducing maintenance costs.
4) The reliability of the system operation is high, and there are basically no complex maintenance requirements in the system operation. Greatly reduce the labor intensity of workers.
5) Vibration reduction and isolation greatly reduce the vibration amplification effect of rigid couplings. Since the original rigid coupling is replaced by the Qingdao Spring permanent magnet driver, the vibration on the load side will not be transmitted to the motor side, and vice versa; therefore, the amplification effect of the rigid coupling on the vibration can be eliminated.
6) It can tolerate a large installation alignment error, and the maximum deviation can reach 0.5mm.
7) With soft start/soft stop function: it can effectively reduce the starting current of the motor and reduce the mechanical impact on the motor and load.
8) High reliability and long service life, with a design life of 30 years.
9) Zero operating cost, small maintenance, almost maintenance-free, and extremely low maintenance cost.
10) Precise process control.
11) Simple structure, suitable for various harsh environments. Green and environmental protection, no pollutants, no harmonics.
12) Small size and easy installation, it can be easily retrofitted to existing systems or used in new systems.

4. the selection points of magnetic coupling

The petrochemical industry chooses to use magnetic couplings, should pay attention to the following
Aspects of requirements:
1) The product standard conforms to the national and industrial standards of petrochemical industry.
2) The power transmission is adapted to the load, and the motive force must be matched with it.
3) Designed according to intrinsic safety requirements. Magnetic couplings are non-power equipment and are intrinsically safe, but the core component for power transmission is permanent magnets. Through research and use of new magnetic materials, the magnetic circuit design should be optimized, and the optimal number of magnetic poles, air gaps, etc. should be determined to ensure the equipment. Intrinsically Safe.
4) Has a reliable cooling structure. The new conductor plate material is selected to improve the thermal conductivity, so that the heat of the magnetic coupling surface can be transferred to the outside in time; the new heat dissipation structure is researched to improve the heat conduction efficiency and heat dissipation capacity, improve the speed regulation curve, make the speed adjustment smooth, and the system runs reliably.
5) There is sufficient mechanical strength, and the strength check is carried out, especially the check of the transmission shaft.
6) There are necessary protection and reasonable structure.
7) If it is a renovation project, it is necessary to consider whether there is enough renovation space on site.

The magnetic coupling has been used for the induced draft fan of the waste heat recovery system of the continuous reformer for more than a year, and the operation is stable and reliable, and no additional maintenance work is required. The practice has proved that the use of magnetic couplings is a practical and effective way to save energy, and it also brings many conveniences to equipment alignment, energy saving, soft start and remote control. The use of magnetic couplings for speed regulation of the drum and induced draft fan used in the waste heat recovery system of the heating furnace of the oil refining unit not only has intuitive and short-term energy-saving and power-saving benefits, but also reduces operation and maintenance costs in the long run. The reasonable limit of energy-saving is technical and economic optimization, that is, to see whether the economic indicators paid to achieve advanced energy consumption indicators are reasonable. Refining and chemical enterprises should rely on scientific and technological progress, apply and popularize advanced energy-saving technologies, improve economic efficiency and competitiveness, promote energy conservation, reduce consumption, reduce costs and increase efficiency, and realize the sustainable development of refining and chemical enterprises。